Robot Cars: Getting from here to there

When will you first ride in a robot car?

It might be on a business trip. You wearily trudge out of the terminal and into the line at the taxi stand. About 1/3 of the taxis are robot cars. They look just like regular vehicles but with dark windshields and some extra gear on the roof and the front. Initially the robot cars might only be certified to go to certain destinations such as major hotels in the city center. This is fine, you are going to the downtown Hilton. A human dispatcher loads your bags in the trunk and asks for your destination. He speaks into his wrist and the taxi’s roof light goes off to indicate it has taken a fare. You tentatively hop in.

There is no driver to talk to, but there are large screens in the back seat showing your progress along the route to your hotel. And a big red call button if you need assistance. The ride is uneventful and smooth. You arrive quickly and safely. You pay electronically from your mobile phone. By recently established convention you are given no option to tip.

Years later you might purchase a robot car of your own. You go to the Honda dealer and select a mini-van. Not radically different from today’s models except again for some extra external gear.

The driver’s seat swivels because you can face any direction while the robot is driving. The robovan still has manual controls so you can steer on the rare “unsupported” road. During a typical drive however no intervention is required. You enter the address and then read, play with the kids, watch a movie, or even snooze. In the latter case the car can be programmed to wake you a few minutes before arrival. 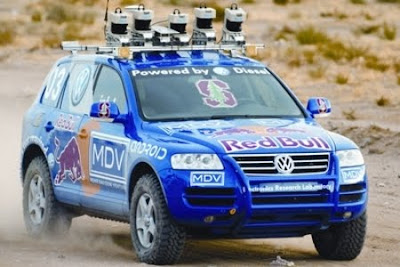 When will all this happen? The technology required is actively being developed. In 2004 DARPA ran a “Grand Challenge” contest for robot cars. No vehicle completed more than 7 miles out of the 150 mile course. That’s like holding a marathon and no one manages to run more than a mile! The very next year however 5 cars finished the completed the entire 132 mile course. That’s incredible progress for one year. And that was 5 years ago.

Today robot cars are hitting speeds of 130 mph, drifting around corners and performing stunt moves like sliding into parking spots. It will not be long before robot cars have the technical ability to drive in normal traffic on any road.

The question is, will we let them? This is a big social and legal question. How will people feel about sharing the road with robots? How will people respond to the crashes involving robot cars? Where does liability fall? What happens to people who make their living driving today?

Robot cars today seem “futuristic” but by the time they become common the world will be a different place. Advances in computers, robotics, medicine, and manufacturing will dazzle us. Robots cars will be impressive, but will pale in comparison to whatever is brewing next.

Consider if it is 20 years before you personally own a robot car. That’s 7,300 issues of the New York Times you’ll have to plow through, 350,000 rotations of CNN Headline News. You will see and hear every angle of this story unfold in excruciating detail. Every technical milestone and every legal battle, every setback. You’ll be sick to death of robot cars before you set foot in one.

Can this all really happen in 20 years? I really don’t know how long it will take. It’s a social and legal question mostly, how quickly do we want it to happen? What I can predict is there are inevitable milestones we’ll have to pass along the way.

So these are my meta-predictions about robot cars:

Robot cars will come of age in a era where have copious computer time to run all manor of simulation. One focus for simulations will be crash or near-crash situations. Yes robot cars can crash, if there is simply no way to avoid it. But robot cars will minimize injury or damage, instantly evaluating every possible evasive maneuver and executing the best one.

A fleet 10,000 test cars could hit 100M hours of use in just a few years. Starting on isolated test tracks with fake traffic and eventually winning legal approval to drive on real roads with real traffic. At first a human will be sitting behind the wheel, ready to override the machine. Later humans will be on waiting in a centralized location to remotely pilot vehicles only if needed.

This is more of a stunt than an important milestone, but it will get a lot of coverage. Small crowds will gather in each city as the car drives though. It will be a slow meandering course, not a robot Canonball Run. Security will be a concern as auto-Luddites make threaten to destroy the car.

Pilot programs would exist for private vehicle owners as well as commercial vehicles like taxis, delivery vehicles, long haul trucks. The commercial world has the biggest motive to adopt robot cars, for cost saving and safety, but also the biggest resistance because of the job loss. Vehicles would be monitored closely with remote humans standing by to take over if needed.

Even if robot cars were only moderately better drivers than humans, they would be vastly safer. Today we have more than 30,000 vehicle fatalities per year, and 10,000 of them involve alcohol. Robot cars will never drink, never be tired, never be distracted. Crash statistics will show robots are 100X safer than human drivers.

They won’t let a robot car in the real Indianapolis 500, but robots will compete in exhibitions against professional drivers. The competitions will be repeat until the humans no longer stand a chance at winning. Normal human-only competitions will continue.

7) Staged rollout for private use

Unrestricted private use will begin slowly, with early adopters lining up for short runs of a few thousand cars. Over the years production runs will ramp until tens of millions of cars are sold every year. Finally it’s your turn. Stroll down to the dealership and pick up your brand new robot car!