Ray Kurzweil predicts The Singularity is coming by 2045 based on his law of accelerating returns.
Wednesday, December 09, 2009

Ray Kurzweil is an accomplished inventor and entrepreneur. He’s had an amazingly productive career with multiple notable inventions and ventures in deeply technical fields. He started young: in 1963 at the age of 15 he wrote his first computer program.

In Malcom Gladwell’s recent book Outliers he writes at great length about how unusual it was for Bill Gates to have access to a computer in the late 1960s, and how formative it was for him. So for Kurzweil to be writing software in 1963 was exceptional and it is understandable how this head start, combined with prodigious natural talent, could lead to a remarkable career. At the age of 17 he appeared on the game show “I’ve Got a Secret” demonstrating a machine he invented which could compose music:

He went on to enjoy several technical and commercial successes in the related but different fields of optical character recognition, speech synthesis, and speech recognition. He even returned to computer music in the early 1980’s. This time he created line of advanced synthesizers which for the first time could fool listeners into thinking it was the real instrument. As with his other ventures he eventually sold the company, but the Kurzweil synthesizer brand remains and its products are still popular and respected today.

I really admire the depth and breadth of Kurzweil’s technical achievements, and his success as a serial entrepreneur. So I was surprised when I learned about one of his more recent businesses: he sells vitamins online. Not just regular keep-your-skin-looking-healthy vitamins, but an extensive line of “longevity products.” For example $89.75/month will get you the Anti-Aging MultiPack with ingredients like Resveratrol and Ubiquinol.

The vitamin selling is really an offshoot of yet another one of Kurzweil’s careers, possibly the one is best known for today: he is a futurist. A futurist is anyone who makes predictions about the future. There are no particular qualifications to be a futurist, but to make a career of it you have to have an angle. Kurzweil’s predictions are intertwined with a concept called The Singularity. The Singularity is a point in the future when technological progress accelerates so much that it outstrips anyone’s ability to comprehend it. It is impossible to “see beyond” The Singularity, because humanity will be so radically transformed by it.

Sometime during The Singularity it will become possible to capture the complete state of a living person and “download” them into a computer. That is, the person will still exist, but not as a biological entity only as a pattern of bits in a computer. This is where the vitamins come in. Kurzweil believes The Singularity is close, that it will start around 2045. He also believes medical technology will advance rapidly, such that even a modest extension of your life span might be enough, depending on your age today, to keep you alive until The Singularity. And if you make it that far, you can in theory live forever.

This is only a thumbnail sketch of his ideas. Kurzweil goes into great depth about the reasons he believes this all will happen, as well details about what exactly will happen leading up to and even after The Singularity. He explains it all in several books as well as long articles on KurzweilAI.net.

So this is a pretty radical prediction, what do I think about it? For one, predicting that The Singularity will arrive about 35 years from now seems awfully suspicious. This puts immortality just within the reach of his core book and vitamin buying audiences. It’s too neat of a pitch: an amazing transformation of all humanity is coming, act now and you too can be a part of it!

Even if he his completely genuine, his aggressive timetable is still the most unbelievable aspect of his predictions. If he were talking about thousands of years in the future, anything seems possible, but 2045 is just not that far away. Kurzweil calls this the “argument from incredulity” or the “I just don’t believe it” reaction. He doesn’t consider this to be a very good objection.

I guess I can refine my incredulity a bit. I just don’t believe the guy making the most radical predictions is likely to be right. Kurzweil is saying 2045 but a lot of people don’t think the Singularity will ever happen, they don’t think computers will ever be smarter than humans for example. So what is the safest bet? I have to go with something in the middle. Some portion of his predictions will come true, but it will take a lot longer than he expects. The wisdom of crowds applied to futurism: the average prediction is going to be more accurate than any single prediction.

Kurzweil’s biggest contribution isn’t even a prediction but a historical observation: The Law of Accelerating Returns. This is like Moore’s Law on steroids. His claim is that all “information technology” improves on a smooth exponential curve. The doubling of disk drive capacity or CPU performance, the halving of various costs, the doubling of bandwidth. He is saying that all these phenomena are due to the same basic mechanism. And it isn’t new. He shows the same trend lines going back to vacuum tubes, even the invention of fire in one case. 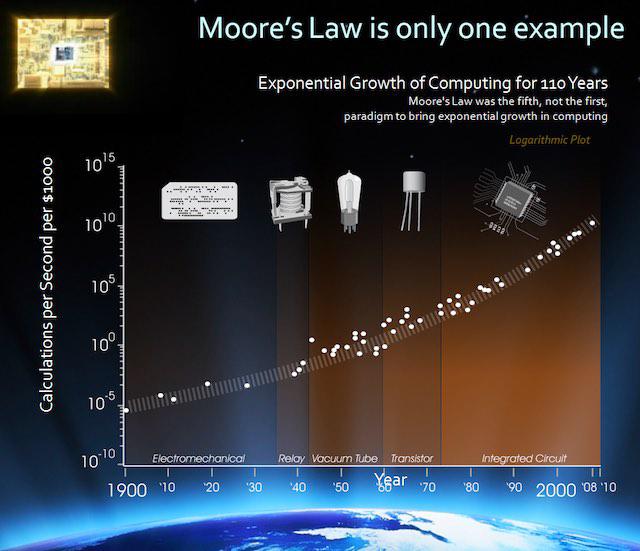 All of Kurzweil’s technology predictions are based on applying The Law of Accelerating Returns, extrapolating trends which have already begun. Kurzweil makes many specific predictions most of the about what another author calls the GRIN technologies: genetics, robotics, information technology, and nanotechnology.

Kurzweil predicts these technologies will all flourish and start to converge, they will all become information technologies to some degree. He believes Artificial Intelligence will finally succeed, that computers will exhibit human level intelligence and soon after they will become far more intelligent than humans.

Even though I don’t buy Kurzweil’s timetable (or his vitamins!) I think there are a lot of good ideas in his predictions. This is a smart guy and he’s given this a lot of thought. I consider his writing to be essentially Science Fiction. It is a form of Science Fiction which is heavy on predictions and light on story. We don’t reject a Science Fiction author because some of his ideas seem crazy, we still consider them a worthy source of insight and entertainment.

I particularly like Kurzweil’s Law of Accelerating Returns. I would like to write more about this in future, it is of great interest to me not whether this is happening, he hammers it home that it is happening, but exactly why it is happening. I think many of Kurzweil’s other predictions make a great jumping off point for philosophical discussions: what exactly would it mean to be downloaded into a computer? I will more have to say about this also in a future post.