How I Trained My TikTok

How I taught my TikTok to find worthwhile content.
Thursday, May 12, 2022

While the pandemic raged I would often relax into a comfy position and lose track of time watching one video after another on TikTok. The portal into other people’s homes and minds was entrancing, without the commitment of long-form TV. And TikTok is a mystery box, like a slot machine, you never know what will come up next. When you first sign up TikTok does not assign you a bunch of celebrities or popular accounts to follow; they don’t explicitly ask about your interests. Instead, it just plays videos. You can watch each video or swipe up to skip to the next one. 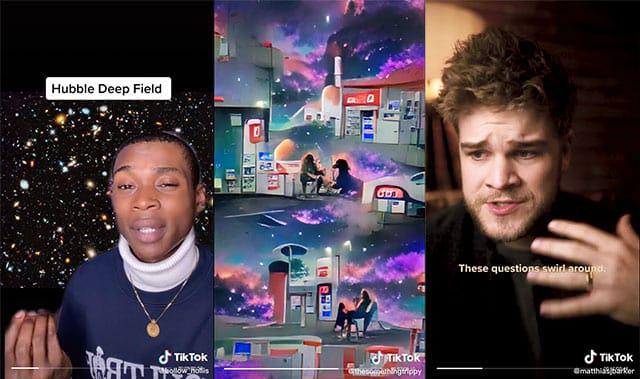 I was amazed at how well TikTok chose videos for me, given I had not given it any information. I was pretty sure it was customizing my feed based on “watch time”, and in a 2020 blog post, TikTok admitted that watching a video “from beginning to end” was a “strong indicator of interest.” But the recommendation algorithm didn’t just send you more of the same; it was a nuanced exploration, cycling through many different threads of interest, circling back to similar themes, but always exploring new directions. It worked so well that it almost seemed like magic.

The honeymoon period eventually ended. While the videos were often visually stunning, weird, funny, or shocking, it was too often a frenetic melange, a never-ending syrupy sweet firehose. Also, while videos were never repeated, there were many variations on the same themes: people flying off huge ramps, hikers revealing amazing views, clever van conversions, and theatrical make-up. After a while, I uninstalled TikTok.

A few weeks later, restless for cheap stimulation, I installed it again. This time I decided to make my own videos. I didn’t want to appear on camera, so I cobbled together videos from podcast snippets and stock footage. I created lyrics for a remix of a Nicki Minaj song and recorded a video of fireworks with Chemical Brothers playing in the background. While I didn’t get millions of views, I did get hundreds. One of my videos was forty seconds long and it was viewed by 1,100 people, for a “cumulative watch time” of six hours. If my video had gotten a million views the cumulative watch time would have been more than a year, a year of people’s time. 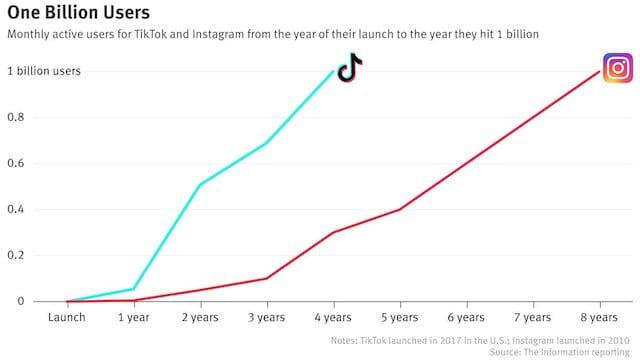 Back in High School, during the cable TV era, I once scored twenty-five dollars by participating in a focus group for a new show. I sat in a semicircle with other attendees pressing buttons on a clunky remote control to indicate how I was enjoying the episode. A few decades later, as the Delta variant of COVID-19 terrorized the world, TikTok cheerily announced that they now had one billion monthly active users, which is 13% of the Earth’s population. Given how TikTok works, however, these were not passive viewers, they were one billion active focus group participants, each providing continuous feedback, for hours a day. And they provided these rating services free of charge. Furthermore, all billion viewers were one click away from becoming creators. There were no gatekeepers, anyone could transition from watcher to creator even on a whim. 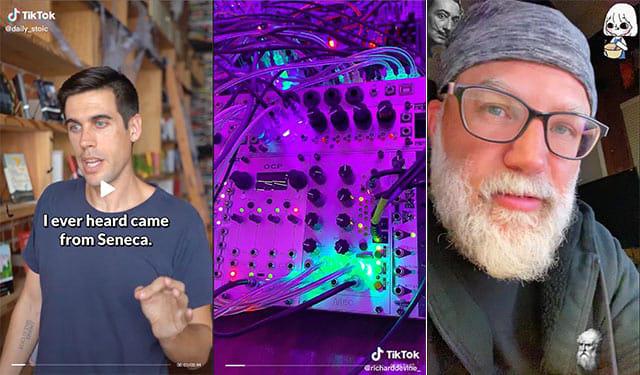 The TV industry might take months or years to respond to feedback by creating a new show, but with TikTok, a creator could post a video in the afternoon, get feedback during dinner, and post a better video later that night. Looking at the history of videos made by a single creator was like watching Evolution at work: the lighting improved, the audio became clearer, and the jokes were funnier. Now that I better understood how TikTok worked, I changed my approach to watching videos. If a video seemed repetitive or shallow or snacky in any way, I skipped it, and I tried hard to do this within the first few seconds. It required constant discipline to not become entranced by shiny objects. On the other hand, if a video seemed nourishing or worthwhile, but was a bit slow-paced or challenging, I stuck with it. I was mindful that my viewing choices were impacting both the algorithm and the creators: whatever I watched TikTok would make more of it. 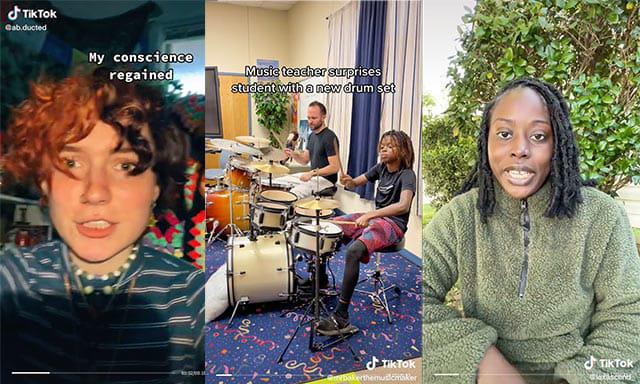 Quickly my For You page was transformed. I saw long thoughtful videos on motivation, psychology, science, and philosophy. I listened to excerpts of lectures on Stoicism or Zen Buddhism, and speeches by enigmatic Indian meditation gurus. It figured out I was a software engineer and showed me jokes or insights about work. At one point I was hunting for a job and TikTok started showing me interview tips. I witnessed drawings and paintings and animations by countless visual artists. I found myself zooming through trippy 3D fractals while listening to a sermon by Alan Watts. Instead of watching videos with thousands or millions of views, I was seeing videos with a hundred views or even ten views. The algorithm seemed to be trusting me to deliver an early vote. Contributing the millionth view to a video felt inconsequential and anonymous, but being the eleventh viewer seemed intensely personal. I frequently stumbled on musicians tentatively playing their instruments for the camera; their lighting and audio needed work, their performance was not polished, but I watched as if to say “please keep trying”. 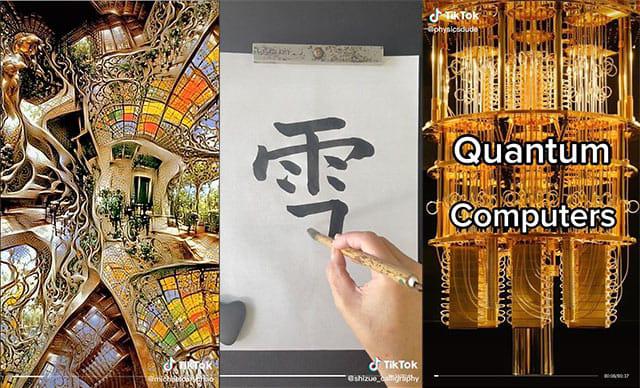 TikTok debuted five years ago, but Mark Zuckerburg, who reigns over both Facebook and Instagram, has been slow to appreciate the advantage of TikTok’s approach. In an April 2022 earnings call, he was still marveling that the industry has shifted towards recommendations by AI algorithms: We’re also seeing a major shift in Feeds to having more of your feed recommended by AI, even if the content wasn’t posted by a friend or someone you follow.

It’s not surprising AI is transforming our social networks; we see AI performing new and amazing feats almost weekly. Two recent systems, GPT-3 and DALL-E, are capable of creating near-human-level content in an automated way. GPT-3 can write prose and DALL-E can create images. Once AI output meets or exceeds what humans can do, will humans stop creating, will we let the machines take over producing our content? I don’t think so, I think TikTok shows us humans crave to create as much as consume. The AIs won’t take over, but they will live in the spaces in between, powering human-to-human interaction at a scale and speed we’ve never seen before. TikTok is the Mirror of Erised, from Harry Potter, made real: it shows you what you want to see. When I gaze into TikTok before bed I’m reminded that we are not done creating, we are not done learning, we are not done. 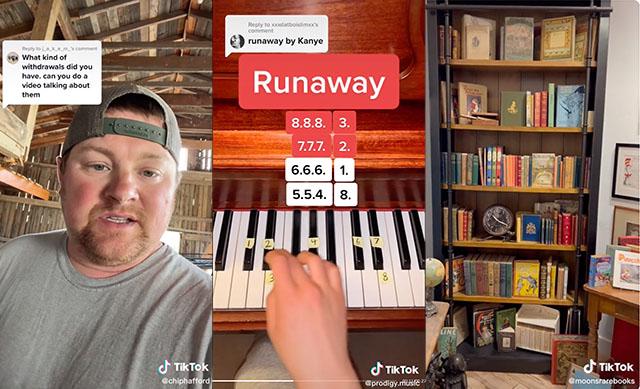 TikTok training is an ongoing process; it will slowly re-introduce mainstream and frivolous content if you let it. You must pay close attention to quickly identify that a video is not for you, preferably in the first few seconds.

As an example, I like drone footage, videos with sweeping views of some amazing landscape. But eventually decided I had seen enough of it. So if a video appears and it looks like aerial footage of any kind, I just immediately skip it. It’s a reflex. There are dozens of other video categories which are immediate skips for me. Not because they are necessarily bad, but just because I don’t want to see more of them. Remember, it’s constantly watching what you choose to watch. In addition to skipping videos here are four other ways to tell TikTok what content you want to watch:

Below are some Hacker News comments about this post. These groups of comments are so opposite of each other, it seems clear they were not looking at the same videos.