I watched Tucker Carlson a few times recently on Fox News. I kind of like the guy. He plays the “adult in the room” to a tee. After each “gotchya” clip he stares blankly yet endearingly at the camera, stretching the silence out for several long beats before dishing out his “devastating” response. His delivery is simmering yet ultra-restrained outrage. He’s a smart guy and passionate and both come across well on camera. 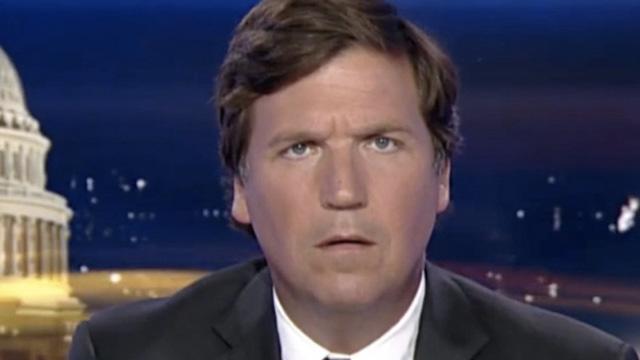 However yesterday he said two things that conclusively revealed to me he’s completely and utterly delusional. Or at least he’s playing a character who is delusional, and he’s playing that character with unwavering conviction. He made these two points:

So he’s talking about Trump, right? Anti-science, that’s Trump, narcissistic, that’s Trump, pampered, that’s Trump. Ask anyone anywhere, even on the right, they know these criticisms are directed at Trump on a daily basis.

His rhetorical stance here is so bold and so strange I had to rewind it a few times to see if there was a wink or nod in there, but I saw nothing. The shtick works, I guess, because he does it day in and day out so his audience knows the drill, he doesn’t need to explain or justify it.

Basically he takes out a giant pair of shears and just snips away Trump’s entire presidency, snips away the largest and most visible part of our nation’s political reality, a reality we are all witnessing spill out daily in his endless pandemic briefings. He snips that all away so that he can bash the left in an empty room, unencumbered by the regrettable mess of Trump’s existence.

It’s like complaining to your neighbors that their barking dog is a noise violation when you have have a rotating panoply of death metal bands in your backyard giving an open air concert twenty four hours a day.

It seemed so strange, but then I thought about it for a while, what else can he do? Trump is so glaringly bad, so mind-bogglingly incompetent, so cartoonishly bumbling and flawed, that Carlson simply could not do his show if he had to square away his barbs against the left with Trump’s ever present shitshow. If he had to weave those two realities together it would require hours of verbal gymnastics and tortured arguments to even justify a single criticism.

So Carlson’s solution is sort of brilliant. He does his show in an alternate reality, a reality where Trump doesn’t exist, where he can act like the right is being oppressed by left-leaning “overlords", while Trump literally, quite literally, lords over us from the rose garden every day.

It’s fascinating and eerie and frightening to watch Carlson play this game, to watch him bend reality to his convenience. The scariest part is the Fox News fans listening probably find nothing strange or jaring about it, it’s just become part of the air they have all agreed to breathe. So when Carlson brings up narcissism in politics they are right with him in his alternate reality, they shake their head and mutter “what is that damn AOC up to this time!”